Urfi Javed Explains That Why Her Dubai Filming Was Delayed and Claims That the Location Was a Problem for the Authorities.

It was all over the news a day earlier how Urrfi Javed's Dubai shoot schedule had been disrupted. The reality show competitor, who is well-liked by the paparazzi, has frequently made headlines for her unique sense of style. The celebrity is also known for speaking her mind when embroiled in controversy, so when rumours of her detention by the Dubai police began to circulate, she chose to explain the situation. 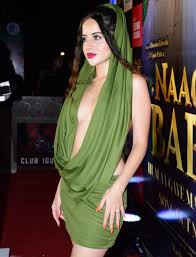 Uorfi Javed was seen discussing the specifics of what transpired during her latest shoot schedule in an exclusive interview with ETimes. The famous diva insisted that the location's problems, not her detention because of her clothing choices, were what caused the shoot to be interrupted. The cops had arrived to halt the shot due to some problems at the venue, she was cited as stating in these stories. Since it was a public area, there was a set time limit during which we could shoot; the production team did not extend the time limit, so we had to depart. My clothing was in no way related to it. The following day, we captured the final segment, so it was sorted
The website previously reported that Uorfi was being questioned by local authorities in Dubai after she recorded a video "in an open area" while wearing clothing that was not "authorised" to be photographed in public. Although the article said that there was "no problem" with Uorfi's attire, it was only because she recorded the video in "an open area" that she was being questioned by Dubai police. The local UAE authorities might delay Uorfi's return flight to India, according to the report's speculation.
- December 22, 2022
Email ThisBlogThis!Share to TwitterShare to FacebookShare to Pinterest