Baba Vanga's Past and Future Predictions

Vanga Baba, also known as Vangeliya Pandeva Dimitrova, was a Bulgarian mystic and clairvoyant who lived from 1911 to 1996. She is considered to be one of the most renowned and accurate psychics of the 20th century, with a large following in Bulgaria and other Eastern European countries.

Vanga began to demonstrate psychic abilities from a young age, and by the time she was a teenager, she had gained a reputation for her ability to predict the future. She began to see visions of events that had not yet occurred, and would share these visions with anyone who asked her.

During her lifetime, Vanga made many predictions that later came true, including the rise of Hitler, the sinking of the Russian submarine Kursk, and the 9/11 terrorist attacks. She also predicted many natural disasters, such as the Indian Ocean tsunami of 2004, and the Fukushima nuclear disaster in 2011. 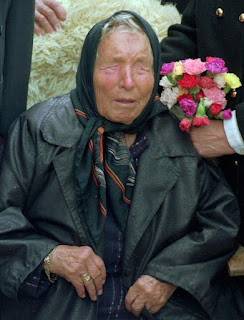 In terms of future predictions, Vanga made many predictions that have yet to come true. One of her most famous predictions is that a "great Muslim war" will take place between 2010 and 2043, and that Europe will be almost completely destroyed as a result. She also predicted that a new form of energy will be discovered in 2028, and that it will be used to power vehicles and homes.

Vanga also predicted that a new form of medicine will be discovered in the 21st century, and that it will be able to cure all forms of cancer. She also predicted that a man will be elected as the president of the United States in 2020, who will be "the last president" and will preside over the end of the country.

Despite her many accurate predictions, Vanga was also known for her ability to help people with their personal problems. She would often give advice to those who came to her for help, and many people found her advice to be wise and insightful.

In conclusion, Vanga Baba was a remarkable psychic and clairvoyant who made many predictions that later came true. However, it's important to remember that not all of her predictions were accurate, and that her predictions should be taken with a grain of salt. As for her future predictions, only time will tell if they come true or not.

It's always important to be cautious about predictions and not to put too much trust in them, instead focus on the present and work on making the world a better place.